Working in the laboratory

<<For now, the story of this trip ends here but there is still much to learn and share with the data we will generate and that you will find in this web page. Antarctica and is now far away, in the horizon we still see some icebergs against waves, foam and the explosive colors of the sunset as we have had night again since some days ago. The white landscape will remain in our memories and the thousands of photos and videos we took since the first sighting of an iceberg. Within us starts growing a feeling that makes us want to come back home but also melancholy to leave behind such a special place, from which we have learned much about Nature and, in a sense, also about ourselves.

While he was writing these words from Antarctica, I was in Barcelona working in the laboratories of the Institute of Marine Sciences-CSIC (ICM), waiting for Enrique to come with the samples to start analyzing them.

Enrique arrived by plane to Barcelona from Cape Town, South Africa. Months later, the samples disembarked in the port of Bremerhaven in Germany, and traveled by road to Barcelona, to the ICM, where they have been analyzed during almost a whole year (from July 2016 to June 2017).

WORKING IN THE LABORATORY

In the ICM there are more than thirty laboratories dedicated to the scientific research of the marine environment. Biologists, physicists, chemists, geologists, oceanographers, engineers and technicians work as a team preparing oceanographic expeditions, analyzing data, carrying out analytical determinations of different parameters of water, sediment, marine fauna …

The sediment samples collected in the Antarctic expeditions ECOWED-II and ECOWED-III, have been prepared, analyzed and preserved in the laboratories of the Department of Marine Geosciences of the ICM.  Total Carbon and Nitrogen analysis, organic Carbon and biogenic Silica analysis, have been carried out in the Geochemical Laboratories, and granulometric analysis (grain size of the sediment) have been carried out in the Sedimentology Laboratory. 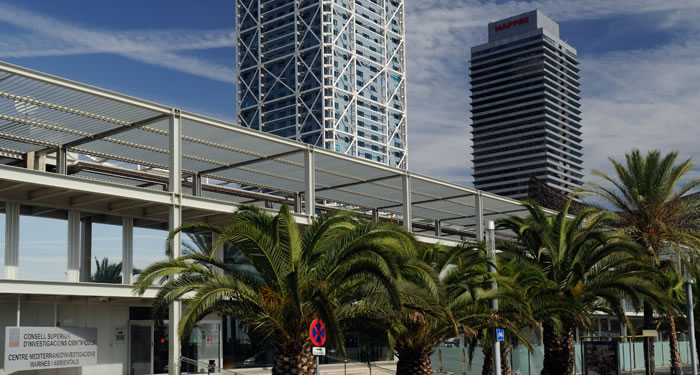 Main entrance of the Institute of Marine Sciences-CSIC (ICM) 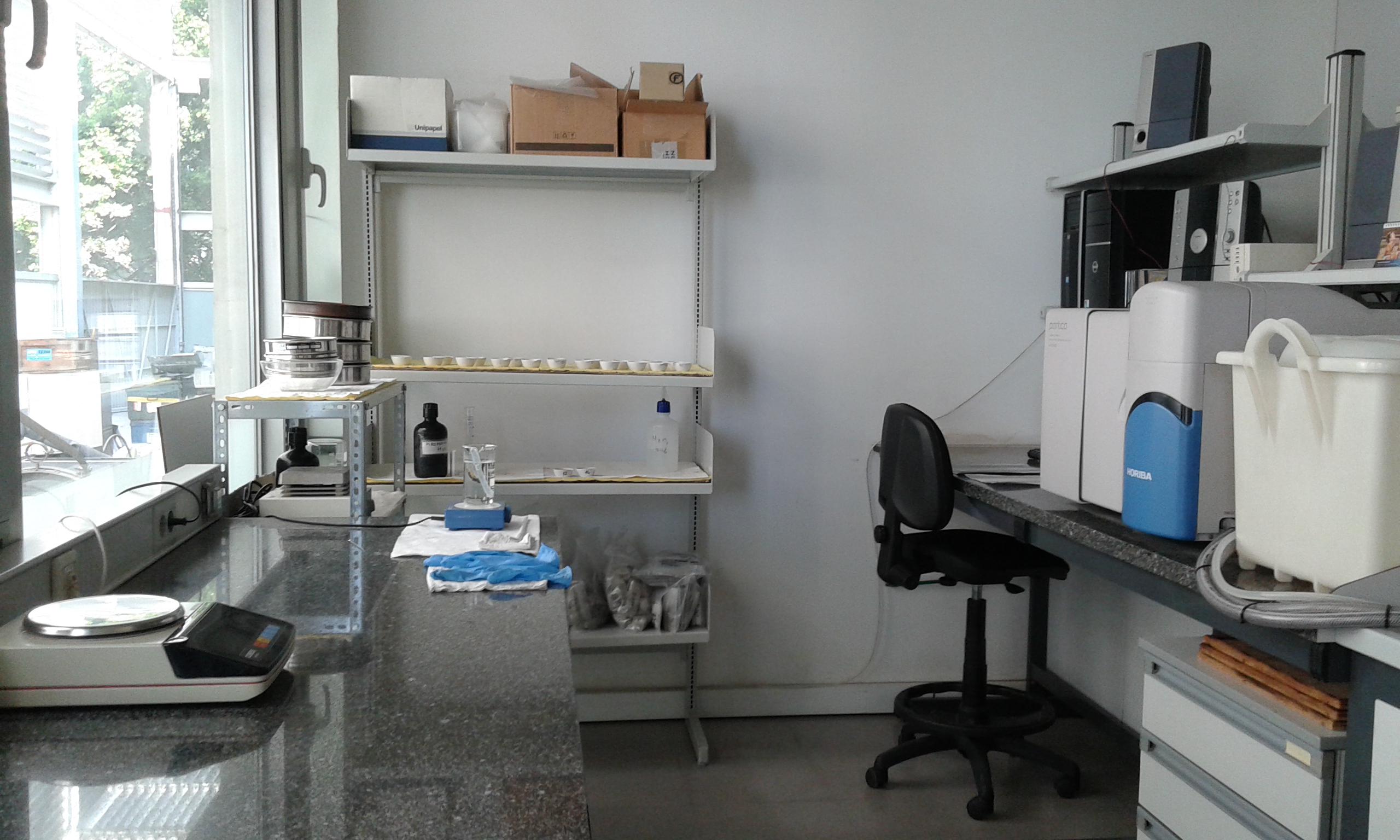 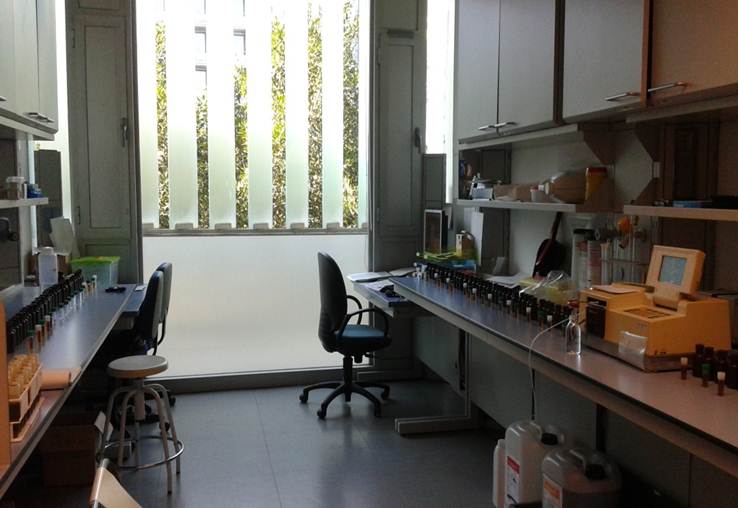 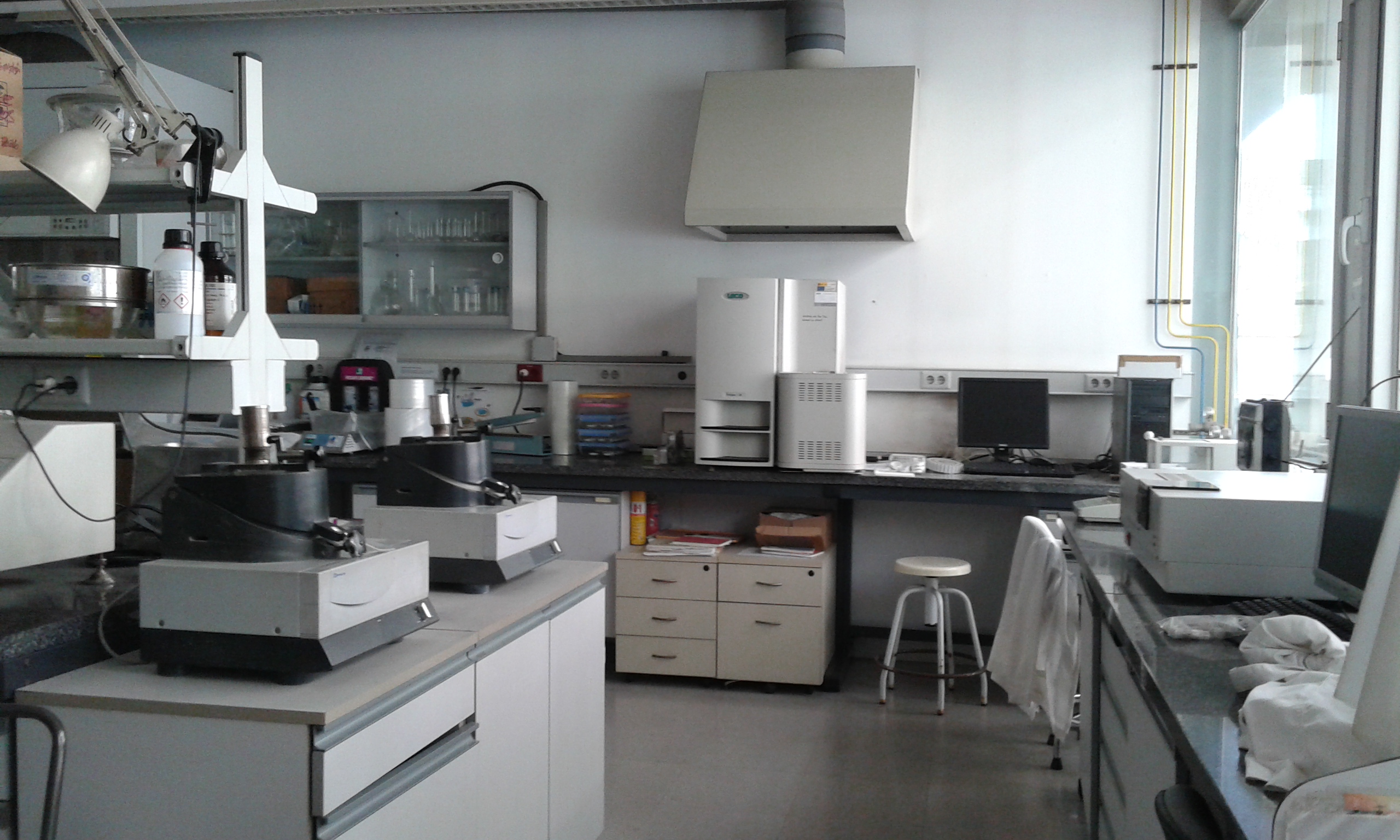 Before analyzing the samples, it is necessary to prepare them according to strict lab protocols.The sediment arrived at the laboratory frozen at -40ºC. The frozen sample is weighed and freeze-dried to remove moisture. Once dried, the sample is reweighed. The difference between the wet and dry weights is used to calculate the humidity of the sample.A fraction of the dry sample is ground to reduce and homogenize its grain size (this facilitates the subsequent chemical attack of the sample). The ground sample is used to carry out different geochemical analysis. We keep part of the not-ground sample to make the granulometric analysis.These analyzes are performed with a laser equipment that measures the deviation of small laser beams produced after hitting the particles of the sample. 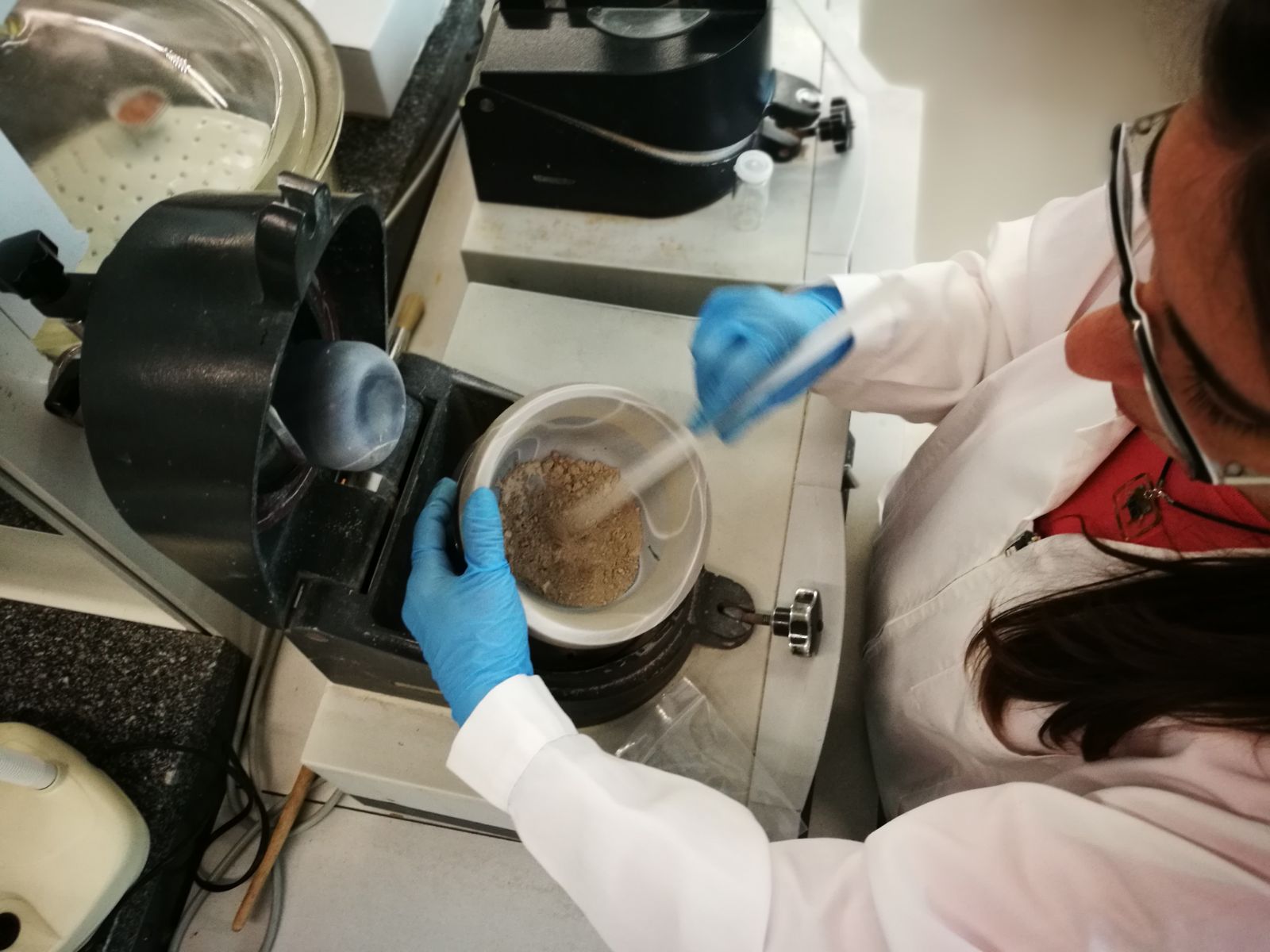 Grinding sample of marine sediment in an agate mill in the ICM geochemistry laboratory. 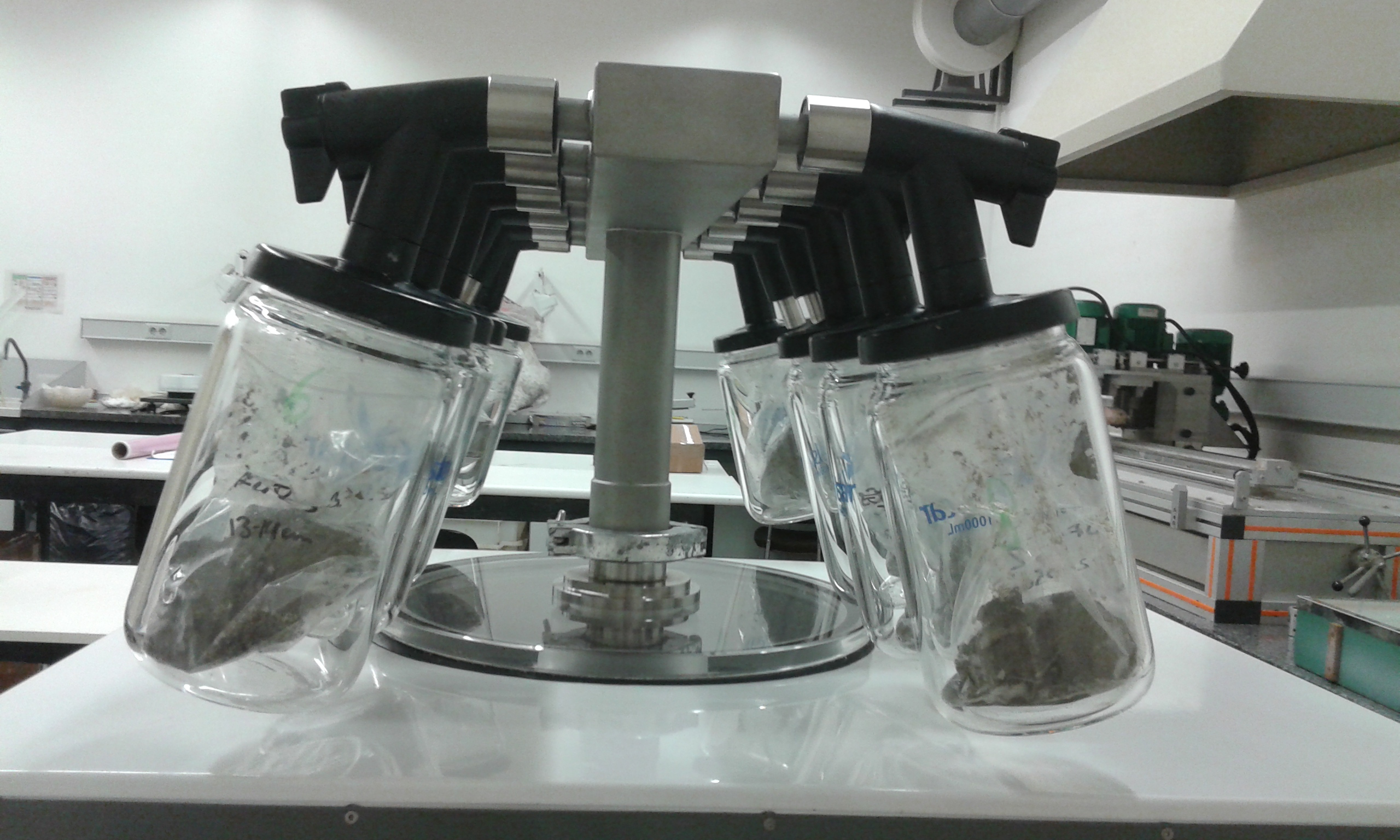 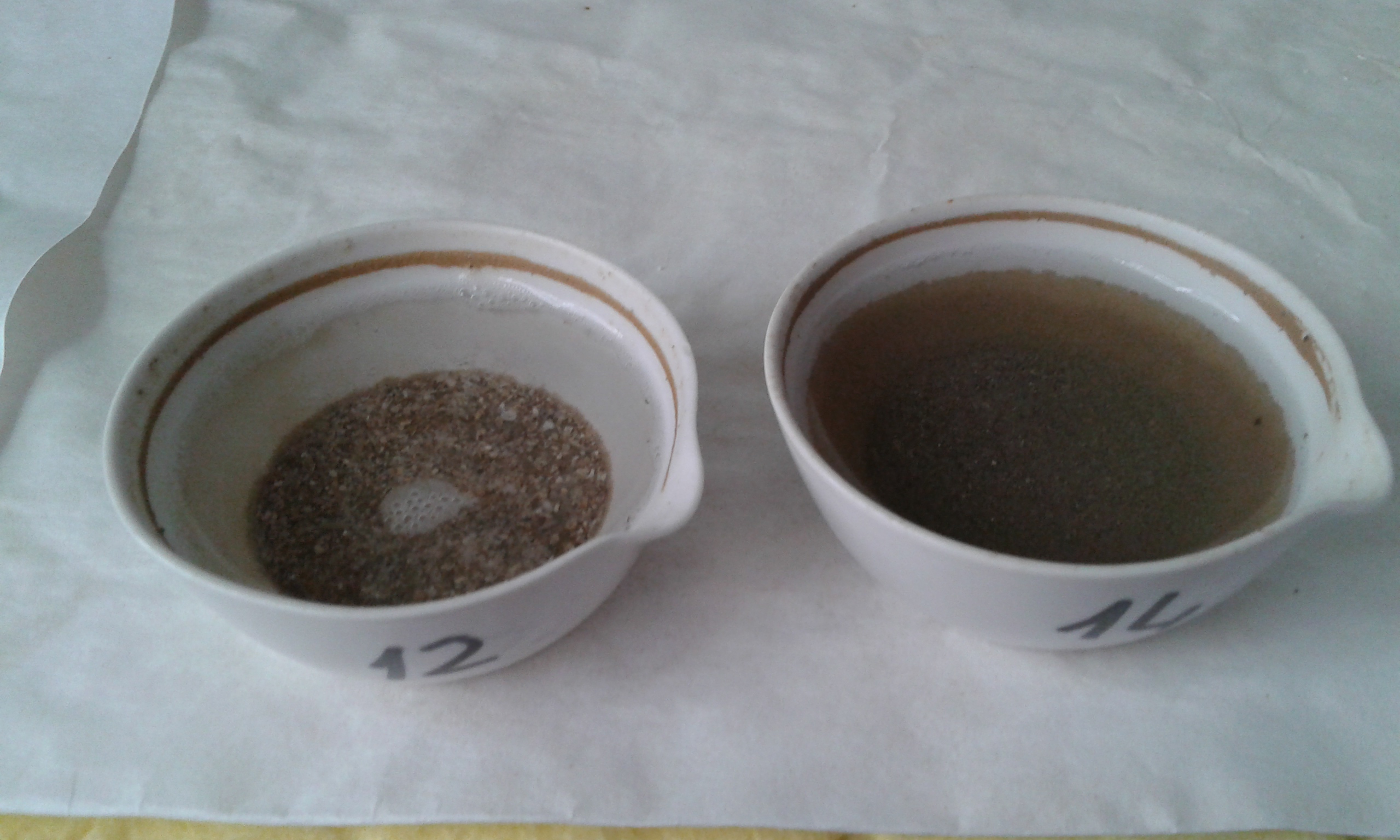 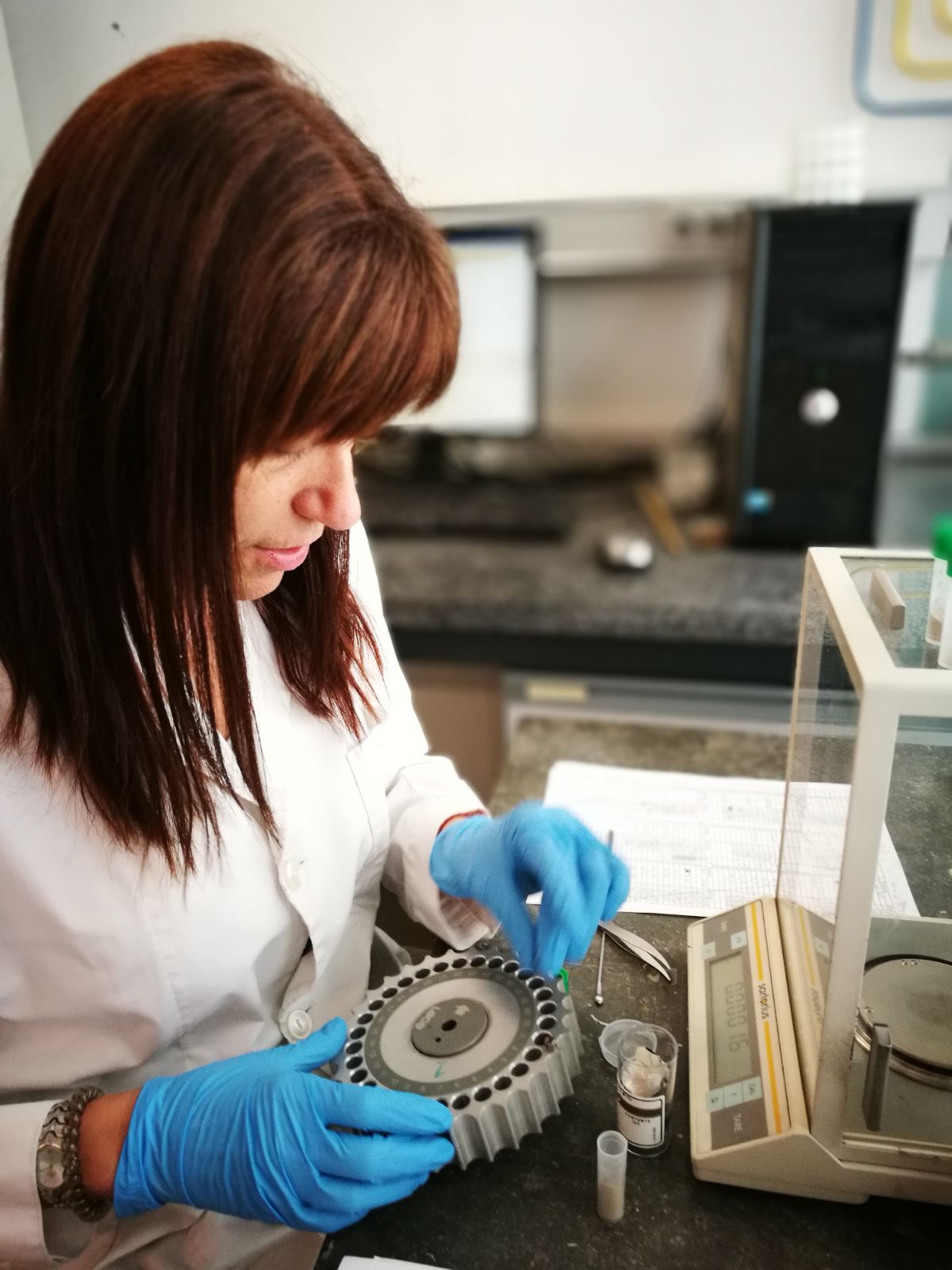 Weighing samples in a microbalance 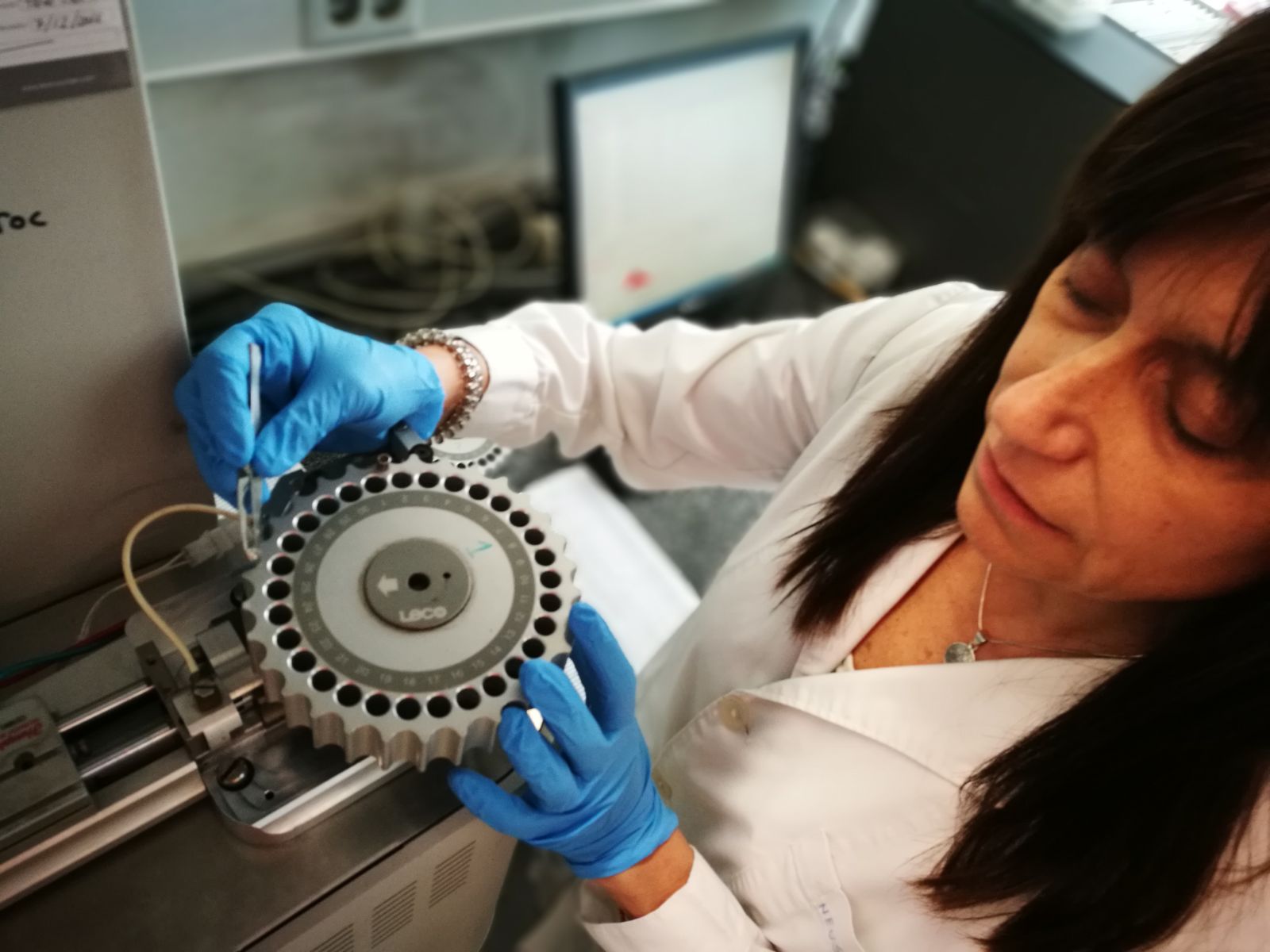 The analyzes for the determination of the total percentage of opal and biogenic opal in the samples, are carried out following the alkaline digestion method. 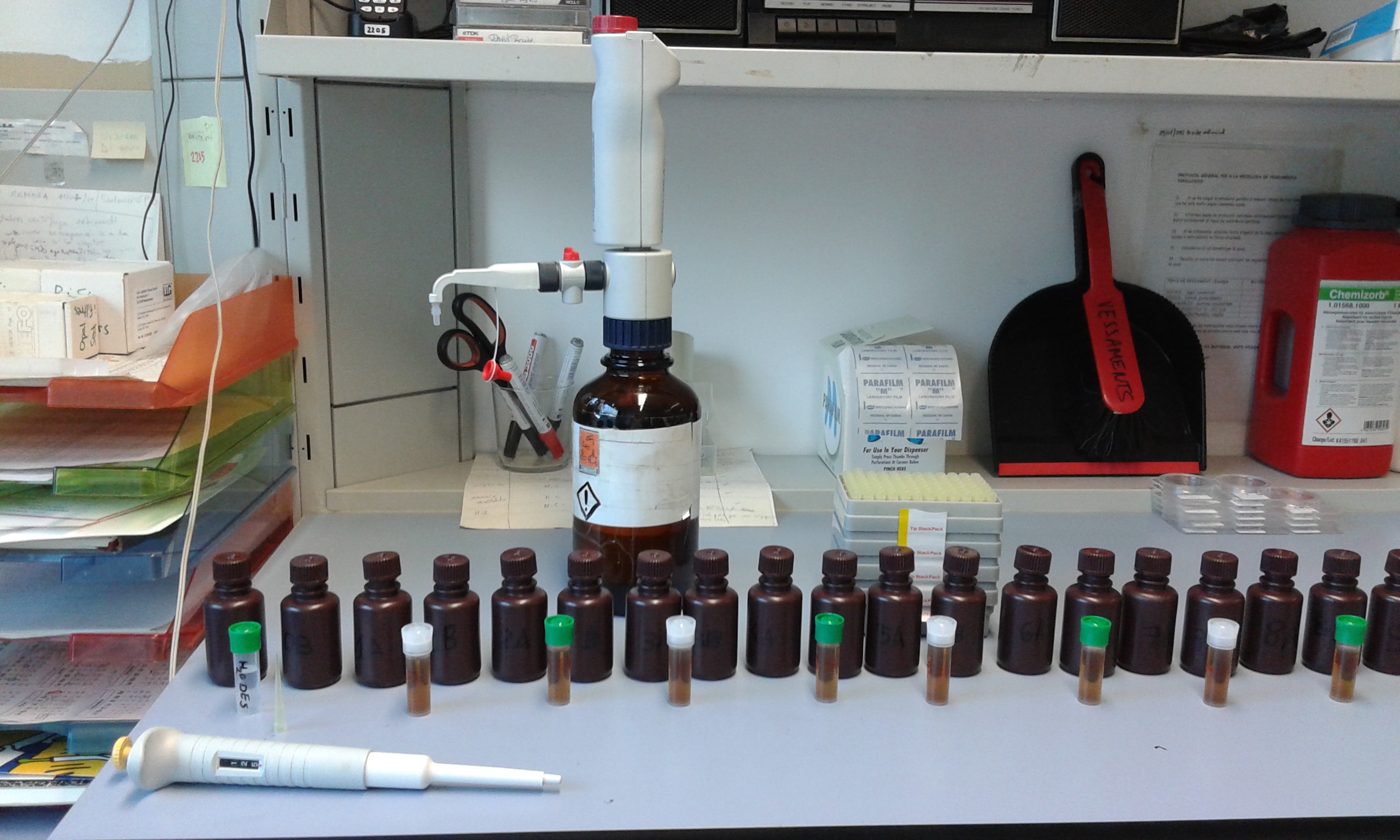 Process of mixing reactive solution, reducing solution and sample extract to develop the silicomolybdate complex. From the absorbances measured with a spectrophotometer, the weight percentages of opal in the sample are calculated 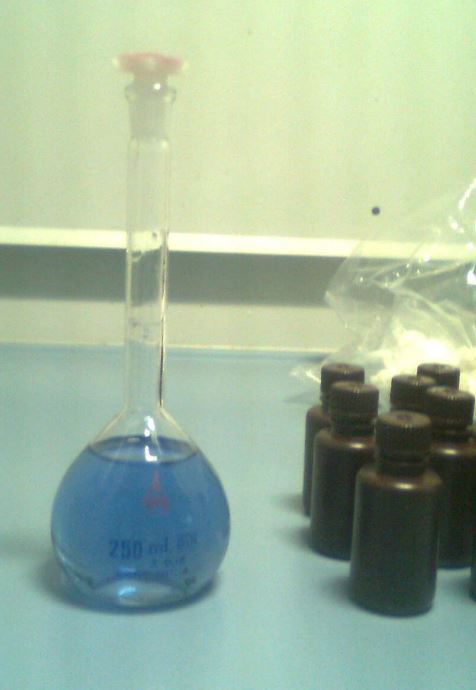 The remaining fractions of the samples already analyzed are kept dry and in the dark at room temperature in the sample repository of the Department of Marine Geosciences.

The results of the analyzes are interpreted, published, and presented in scientific articles, posters and conferences by Enrique Isla and collaborators. Some can already be consulted on this website. Soon, more results and data will appear on the web (available upon request).